Universal Credit (UC) replaces six ‘legacy’ benefits and tax credits for working-age households. The Government first launched UC in 2013 and completed the delivery rollout of the UC Full Service to all Job centres in Great Britain by the end of 2018.

It currently expects all households claiming legacy benefits and tax credits to have moved across to UC by 2023, either through natural migration or managed migration. This expansion of UC across the target population of working-age households receiving means-tested support is what is called caseload rollout. 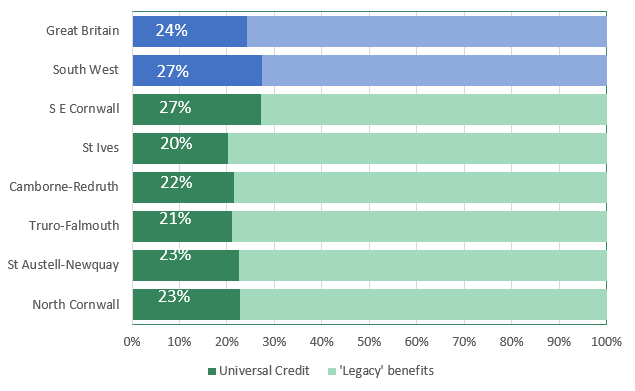 Legacy Benefits are the existing benefits due to be phased out and replaced by Universal Credit:

note these figures are ‘uses’ not ‘users’; an individual user may use more than once

The 2017/8 figure is a 13% increase on the previous year. This is a higher increase than the previous financial year, where foodbank use was up by 6%.

New analysis of foodbanks that have been in full UC rollout areas for a year or more shows that these projects experienced an average increase of 52% in the twelve months after the full roll-out date in their area. Analysis of foodbanks either not in full UC areas, or only in full roll-out areas for up to three months, showed an average increase of 13%.

In a separate publication by the Trussell Trust  Left Behind: Is Universal Credit Truly Universal? ,   Their  findings, from a survey of 284 people on UC referred to foodbanks, show the adverse impact of the initial wait, the lack of available statutory support, the inability of UC payments to cover the cost of living for people who most need it, and poor administration.

Frank Field, the chairman of the House of Commons Work and Pensions select committee has said: